To support Tisza,
donate via PayPal 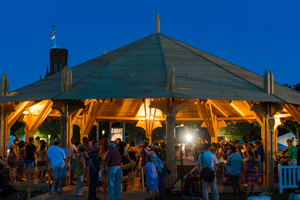 Hungarian couple dancing is similar to other social dancing, in that the dancers typically improvise from a known vocabulary of figures. Keeping with that tradition, class participants are taught basic and advanced figures from popular folk dances played at a táncház (dance house).

The beautiful dances from the Transylvanian village of Magyarpalatka are a favorite of Hungarian folk dancers all over the world. The couple dances reflect a variety of moods, from slow and romantic to fast and energetic with wild spinning and percussive boot slapping. They are so popular that a táncház almost always ends with a Mezőségi set, usually danced with a favorite partner. This class will teach figures from 3 couple dances: the old-style akasztós, and the slow and fast csárdás (szökős and sűrű csárdás).

Bonchida (Bonțida), a village within the Mezőség region of Transylvania, has a rich variety of music and dances among its mixed population of Hungarians, Romanians, and Roma. While each group has its own dances, the Hungarians and Romanians not only developed several similar dances but also attended each other’s dance parties, usually with music played by Roma musicians. Some of the melodies and musical styles date back to the Renaissance, when the nobles in Bonchida imported musicians from Budapest and Italy.

Watch videos: one couple; another couple; and group: magyar, cigány, and román.

Dances of the Bukovina Székelys

The Székelys of Bukovina are a small Hungarian ethnic community with a complex history. Bukovina was a historical region split between present-day Romania and Ukraine. Today, Bukovina Székelys live in southern Hungary, Transylvania, and Serbia. Their dances include improvised dances: the couple dances csárdás and silladri, and the men's verbunk; and set dances: the 3-person hármas tánc, the partial waltz gyurkás, and the line dance szerba.

The Gyimesi Csángó are a Hungarian-speaking group living in the Carpathians in eastern Transylvania. Some of their dances preserve the most ancient elements of European folk dances, while others reflect more modern influences. Gyimes has a mix of couple and line dances, some of which include uneven rhythms and are reminiscent of other Balkan dances. This class focused on the main couple dances: the slow and fast csárdás, and the syncopated kettős jártatója and sirülője.

Györgyfalva (Gheorghieni), a majority Hungarian village, is located six kilometers southeast of Kolozsvár (Cluj-Napoca) in Transylvania. The old ethnography considered Györgyfalva the perimeter village of the Kalotaszeg region. Today it is considered an ethnographic micro region between Kalotaszeg and Mezőség.

The Györgyfalvi csárdás and szapora are a great introduction to Kalotaszegi couple dances as they are easier than the more commonly done Mérai dances. The area also has several simple couple dances which repeat a short pattern: gólyás, hétlépés, and polka.

The csárdás (couple dance) from Kalotaszeg—a region in Transylvania—is smooth and lyrical. This dance has been a favorite of musicians and dancers since the beginning of the táncház movement and is played at almost every táncház.

Watch some review videos made for the 2014 Kalotaszegi class participants. Each link is a playlist containing several videos. Each video contains a brief written description of the figures being reviewed.

Romanian dances in the Kalotaszeg region of Transylvania include an învârtita (forgatós), a couple turning dance in 7/8 rhythm. This dance is also a favorite among Hungarian dancers, and is often played at a táncház after the Hungarian Kalotaszegi csárdás.

Watch videos: archival; one couple; another couple; and Csűrdöngölő 2013.

Kis-Küküllő county, in central Transylvania, has a rich variety of music and dances among its mixed population of Hungarians, Romanians, and Roma. This class focused on the Hungarian (magyar) dances, including csárdás, féloláhos, pontozó, and cigányós (szökős).

Magyarbőd (Bidovce) is a small town in Slovakia with an ethnic Hungarian population. The dances have lovely music, and the dance style is similar to Szatmári, but more elegant. Although the dance cycle includes a karikázó (a women's circle dance), these classes focused on the slow and fast (lassú és friss csárdás).

The Székelys are a subgroup of Hungarians living mostly in eastern Transylvania, including the village of Mezőpanit. In the Middle Ages, the Székelys, as guards of the eastern border, played a key role in the defense of the Kingdom of Hungary against the Ottomans. This class focused on the csárdás.

Watch a video: a couple performing.

The Mezőségi dances are from central Transylvania. They are considered the most highly developed Hungarian couple dances and have many beautiful figures. They are so popular that a táncház almost always ends with a Mezőségi set with a favorite partner.

Watch some review videos made for the 2013 Mezőségi class participants. Each link is a playlist containing several videos. Each video contains a written description of the figures being reviewed.

The beautiful dances from the Transylvanian village of Magyarpalatka are a favorite of Hungarian folk dancers all over the world. The couple dances reflect a variety of moods, from slow and romantic to fast and energetic with wild spinning and percussive boot slapping. They are so popular that a táncház almost always ends with a Mezőségi set, usually danced with a favorite partner. Classes have taught steps of the old-style akasztós, and the slow (szökős) and fast (sűrű csárdás), as well as the option for one man to dance simultaneously with two women (szászka).

Hungarian couple dances from Mezőség, in central Transylvania, are highly developed with many beautiful figures. They are so popular that a táncház almost always ends with a Mezőségi, usually danced with a favorite partner. This class focused on the csárdás dance figures from Ördöngösfüzes.

The Rábaközi csárdás, from northwestern Hungary, is lively, easy, and fun—the perfect introduction to Hungarian folk dancing. In this region of Hungary, which encompasses the area from the Austrian border to the Danube River, one finds primarily newer dance styles, influenced by Western fashions. The dances include the men's karéj verbunk) and dus, and the csárdás and friss csárdás couple dances.

Northeastern Hungary, which has a large Roma population, is known for its rich dance culture. While the Roma (cigány) dance cycle in this region includes a couple dance (i.e., in contact with each other), this class focused on the Roma solo dancing from Nagyecsed.

Szatmári is in northeastern Hungary: The dances of this region are lively and fun and share moves with many other Hungarian folk dances, providing both beginners and experienced dancers a great chance to develop their folk dancing technique, while the structure provides both men and women with opportunities for challenging improvisation.

Watch the review videos made for the 2013 Szatmári class participants. Each link is a playlist containing several videos. Most videos also contain a written description of the figures being reviewed.

The Székelys are a subgroup of Hungarians living mostly in eastern Transylvania. This class mainly focused on dance figures from Sóvidék. The dances include a men's verbunk, and several couple dances: csárdás, marosszéki / korcsos, and szöktetős.

Szék, a village in Transylvania, has preserved a unique folk culture due to its (formerly) remote location. The villagers would rent a house as a venue for social dances and thus created the táncház (literally, dance house). Starting in the early 1970s, young dancers and musicians from Budapest came to Szék to learn the traditional folk art of improvised dancing, which many believed had disappeared. Their research led to a revival of Hungarian folk dancing—known as the táncház movement—and a tradition of beginning a táncház with the dances of Szék, to honor its important role. There are now regular táncház events all over the world, including Japan, Argentina, several countries in Europe, Canada, the United States, and here in Washington, D.C.

The Széki dance cycle consists of seven to eight dances: two men’s dances and five to six couple dances. These classes focused on six couple dances: négyes [I, II], lassú [I, II], szapora lassú [I], csárdás [I-II], porka [II], and hétlépés [II]. These dances are not difficult and provide a great introduction to Transylvanian couple dancing.

A great introduction to the varied dances of the Székely region of Transylvania, the popular Vajdaszentiványi couple dances are often played at táncház-es (Hungarian social dance events). They are danced to beautiful music and are typically led by the man holding on to the woman's handkerchief. This unusual leading style makes the dances look more difficult than they really are. Although there are five couple dances in the cycle (sebes forduló [A], csárdás [B], korcsos [B], cigánycsárdás [B], and batuta [A]), with different tunes, rhythms, and tempos, there are really only two sets of steps (notated as [A] & [B] here). There is also a verbunk.